Not Your Mom’s 5 Layer Mexican Dip

One of my favorite dip recipes my mom used to make was Mexican layer dip.  Anyone remember this?  I feel like it was all the rage in the 90s.  The bottom was refried beans, there was a layer of seasoned sour cream in there, some guac, pico de gallo, cheese…you get the idea.  It was sublime. But also probably not the best thing to eat a ton of, which I tended to do whenever she made it.  There wasn’t much redeeming about it in terms of nutrition, but boy did it taste good!  I had completely forgotten about it until a few months ago.

I was at my Aunt and Uncle’s house and my Aunt served this AMAZING healthy 5 layer Mexican dip.  It definitely didn’t look like the one I was used to.  This one had a layer of black bean dip (homemade – I asked her), this amazing corn relish with onions and cilantro, a healthy layer of guacamole, chopped tomatoes, and cheese.  She also added a layer of black olives, which was a pleasant addition!  This rendition was much healthier than the version I was used to, but seriously way more delicious!  Or maybe my palate has just matured.  Thank goodness.

I would love to give my Aunt credit for this awesome healthy 5 layer Mexican dip, but the original recipe is from Ellie Krieger.

I did make a few modifications, or adjustments based on my own tastes and preferences.  The first being, I doubled the avocado/guacamole layer.  That just seemed obvious.  The original recipe only calls for 2 avocados, but it is supposed to serve 12 people.  I can eat 2 avocados myself, so it seemed appropriate to double it.

I also took my Aunt’s advice and seeded and drained the tomatoes to avoid a soggy dip.  This is an important step, and one I am surprised the original recipe didn’t include.  My Aunt used Kumato tomatoes, so I followed suit and did the same, but any tomato variety will work.  You’ll want about 1 1/2 – 2 cups of chopped tomato.

So there you have it, a healthy 5 layer Mexican dip!  It’s fresh, it’s full of good-for-you ingredients, but still let’s you enjoy the dish you love!

Heat the olive oil in a medium skillet over medium-high heat. Add onions and cook until they soften, about 3-5 minutes. Stir in the garlic and cook for an additional 2 minutes.

Put half of the onion mixture into a food processor or blender with the black beans, chipotle powder, 2 tablespoons of the lime juice, cumin, water and salt. Puree until smooth. Set aside.

Add the corn to the skillet with the remaining onion mixture and cook for about 3 minutes. Remove from the heat and stir in the chopped cilantro.

In a medium bowl mash the avocado with the remaining lime juice.

In another bowl toss together the tomatoes, scallion and jalapeño. Season with salt and pepper, to taste.

To assemble - spread the black bean dip into the bottom of an 8 by 8 glass baking or serving dish. Top with the corn relish, spreading it out to form a single layer over the beans, repeat with the avocado, then the tomatoes. Top with cheese.

To remove the seeds from the tomatoes - slice the tomatoes in half. Run your fingers into the seed chambers and remove all of the seeds. Let tomatoes drain, cut side down, on a paper towel.

This site uses Akismet to reduce spam. Learn how your comment data is processed.

Welcome to A Thousand Crumbs 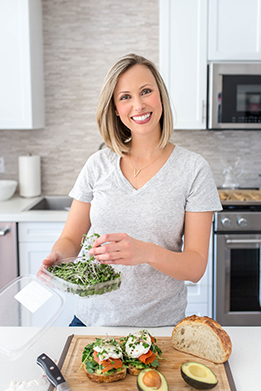 My name is Amanda, and I am so happy you stopped by! I fully believe you are what you eat - so it better be nutritious as well as delicious, am I right? After battling three systemic infections for over six years, I learned how to heal myself through diet and lifestyle changes. With a balanced approach (we all need a cookie now and then!), I teach you how to upgrade your eating with healthy ingredients and simple swaps. Eating the foods you love doesn't have to cost you your health. Feel free to leave a comment, send me an email, or track me down on social media. I love hearing from you, and seeing all of the delicious creations you're making. Enjoy!